The following metrics for deposition of SGID X-ray crystal structures into the Protein Data Bank (PDB) were initially discussed during the Annual Programmatic Meeting between CSGID/SSGCID held on November 19-20, 2008 (Chicago, IL). These metrics were further refined in follow-up discussions between CSGID/SSGCID management to arrive at this document.


A refined structure model should meet the following “Refined Structure Criteria” before it can be deposited into the PDB .

2. Results of data collection should meet the following criteria:


3. Results of refinement should meet the following criteria:
a) Rfactor: Model should have an Rfactor that is below the line presented on the Fig.1 The Rfree - Rfactor should be between 3%-5%. 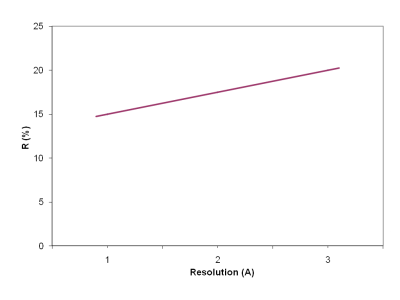 b) The number of waters should be roughly defined by Fig. 2. 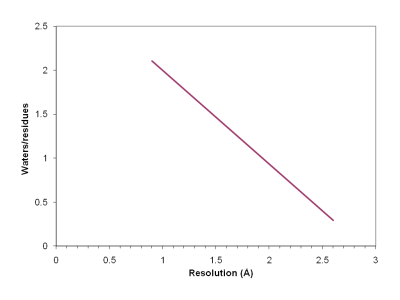 4. Geometry:
a) Model must have >95% of residues in a favored Ramachandran regions as defined by Molprobity. There should be a structural rationale for any outliers.
b) Structure should not contain any residues that violate geometry as reported in Addit. In particular Addit should not contain any warnings about violations of omega angles.
c) The rmsd deviation from ideal values should be:
i. around 0.015 for bond lengths
ii. around 1.5 degree for angles
d) Model should have a Molprobity clash score better than 50th percentile. In case of ‘flip’ warnings, the network of hydrogen bonds should be carefully examined.
e) Geometry of the ligand should be compatible with CSD, if structure of the ligand is known.


It is our belief that the following criteria should guide the refinement and deposition of structures.
1. The Diffraction Precision Index (DPI; as defined by D.M. Blow; Acta Cryst. 2002, D58: 792) should be less than 0.3.
2. The B factors of ligands have to be comparable with B factors of environment.
3. The B factors of waters have to be comparable with B factors of environment.
4. Putative fragment hits are defined as features in Fo-Fc Omit maps showing difference electron density feature(s) of 3 Sigma or more that are not present in ligand removed model.
5. Ligand bound models have clear electron density for at least 60% of the non-hydrogen atoms in the Ligand. The occupancy of the ligand should be not lower than 30%.
6. Any structure which meets the above criteria should be deposited into the PDB, including structures wherein the target is:
i) in a different space group from an existing deposited structure; or
ii) is a target with a different ligand or
iii) is a target with a previously observed ligand and with at least one new component; or
iv) is an alternative conformation observed in a previously deposited structure of the same space group; or
v) is a target with a residue change (by mutagenesis or chemical modification) that is clearly visible in electron density maps; or
vi) is a target with difference density that can’t be clearly fit with a chemical model but the overall structure approximates the above completion metrics.
vii) Models that are solved which meet the above criteria but have a better overall resolution (>0.3Å) or quality than a previously PDB deposited structure should be entered into the PDB and replace existing SGID deposit, if there is one.
7. Structures with metrics worse than the stated acceptable limits require biomedical justification before deposition.
8. All X-ray diffraction raw images for any final PDB structure shall be stored at the University of Virginia. Wayne Anderson and Peter Mylar will discuss procedure that will be implemented by Wladek Minor group. It is responsibility of first author to deposit the data in assigned location and send e-mail to wladek@iwonka.med.virginia.edu with cc to his/hers PI. The list of structures that will not have the diffraction data will be published on the WEB.